The Green Nation of Liberland: Is 100% Sustainability Plausible?

When you type in the phrase “micronation” into the online version of the Oxford Dictionary, right under the definition of the actual phrase, you will see the mention of the Free Republic of Liberland.  Last year, on April 13, the world got its latest micronation, completed with a motto, constitution, and a flag. It also has a self-appointed ruler, the Czech politician, publicist and activist – Vit Jedlicka. The micronation sits on the banks of River Danube; an area its founding fathers argue was never properly claimed. While there are still no houses and building on this land, many people have already shown interest in making Liberland their home. In an interview with the Huffington Post, Jedlicka revealed that within just a few weeks, the country has received over 380,000 citizen applications on Liberland’s official website, out of which, around 70,000 are eligible for citizenship.

Contents show
1. Constructing Liberland
2. Are Sustainable Cities Even Possible
3. The Uncertain Future of Liberland
4. About The Author A modern country calls for a modern style of architecture – that was basically the premise of a design competition held by the government of Liberland. The world’s youngest sovereign nation presents a unique opportunity for architects tasked with designing a self-sustainable micronation that guarantees economic and personal freedom to its citizens.

The winning design, which was announced May 20, 2016, is a self-sustaining cityscape, powered by algae, in which horizontal layers can be built on top of existing layers, as the population grows. The winning proposal was submitted by RAW-NYC, a New York City-based interdisciplinary architecture studio. This design calls for algae to be cultivated on the bottom of each layer of the proposed city; the algae would convert sunlight into energy, through photosynthesis and store it in oil-form so that the biofuel could later be used to power Liberland. While the RAWNYC team envisioned a genuinely sustainable, zero-waste oasis, the question still remains – is this plan plausible.

Are Sustainable Cities Even Possible 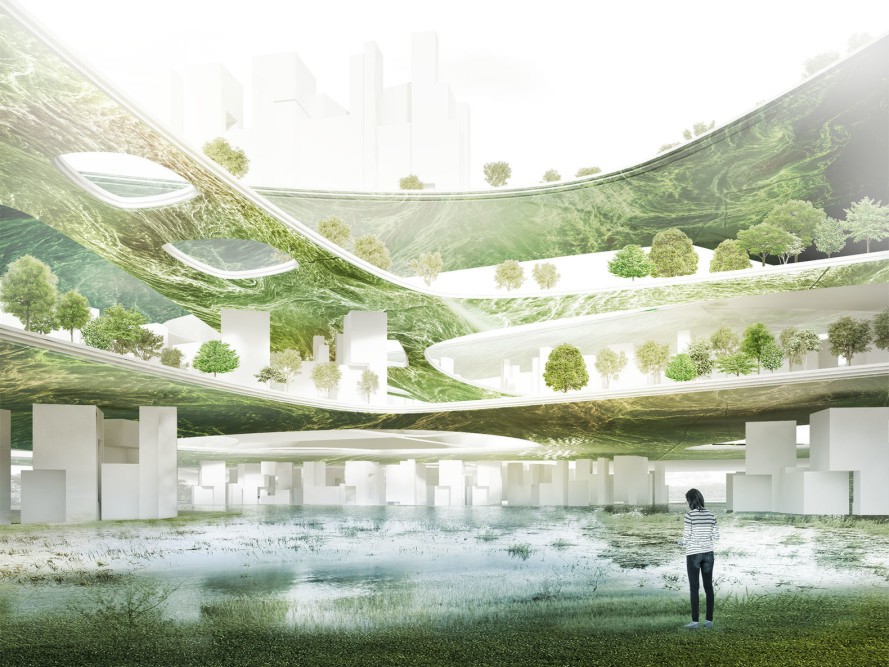 Our cities occupy less than 5% of the Earth’s land area, yet, according to the United Nations, they house more than half of the Planet’s population. In the next 15 years, the percentage is expected to swell to 60%. Furthermore, cities will absorb most of the Earth’s population increase between now and 2050 (more than 2 billion people), with the vast majority of urban expansion taking place in the developing world. Growing urbanization can be positive for the environment (people who live in dense cities, drive significantly less, but there are some troubling trends, such as the increased traffic congestion, blight, and smog. Therefore, if we want to build metropolitan areas that make our planet a better place, we need to start paying attention to how we build our cities.

Today, more than 40% of carbon dioxide emissions come from cooling, heating and powering buildings. Many countries are trying to insulate buildings, and implement more modern and efficient ventilation equipment. Should cities start investing in major weatherization and energy upgrade efforts, energy savings could potentially reach 30%. In addition to the growing population, aging energy systems in many cities need to be upgraded to handle extremely bad weather and flood risks, as New York learned a few years ago, during Hurricane Sandy. However, achieving sustainable design may be prevented by probative costs, because retrofitting cities at scale requires a clear vision, an aggregating body, and of course, a lot of money. A solution might lie in PACE (Property Assessed Clean Energy) – a simple and effective way to finance renewable energy, water conservation upgrades and energy efficiency upgrades to buildings.

The Uncertain Future of Liberland Besides financial difficulties, Liberland still has many roadblocks ahead. For starters, it hasn’t achieved international recognition as a sovereign state. Even though “president” Jedlicka planted a flag there when he proclaimed the country’s founding, he technically didn’t have any right to do it. At the moment, neither he, nor those hundreds of thousands of people who have applied for citizenship can access the land, because the Croatian border patrol is protecting the land 24/7 from Jedlicka and his followers. While the diplomatic matters with both of their neighboring countries are shaky at best, Jedlicka is still optimistic about the implementation of RAW-NYC’s plan. For now, though, the first sustainable nation in the world exists only in renderings.

Nate Vickery is a business technology expert and a futurist mostly engaged in finding and implementation of the latest technology trends into SMB and startups management and marketing processes. Nate is also the editor-in-chief at a business-oriented blog- Bizzmarkblog.com

Nate Vickery
Nate Vickery is a business technology expert and a futurist mostly engaged in finding and implementation of the latest technology trends into SMB and startups management and marketing processes. Nate is also the editor-in-chief at a business oriented blog- Bizzmarkblog.com
Facebook
Twitter
Pinterest
Linkedin
Digg
ReddIt

4 Intriguing Examples of Green Technology We Can Apply...

The issues of global warming and climate change are still a growing problem. Despite the efforts of industries and businesses to reduce pollution, it’s...
Environment

Sustainability, nowadays is one of the most pronounced words we hear every day, but what is it in particular? What Is Sustainability? This term has been...

To be updated with all the latest news, offers, and special announcements
Bouns: You will be redirected to a calculator to see how much you can save with solar energy.

The 10 Best Garden Windmills of 2021 For Backyard Decoration

4 Intriguing Examples of Green Technology We Can Apply Today